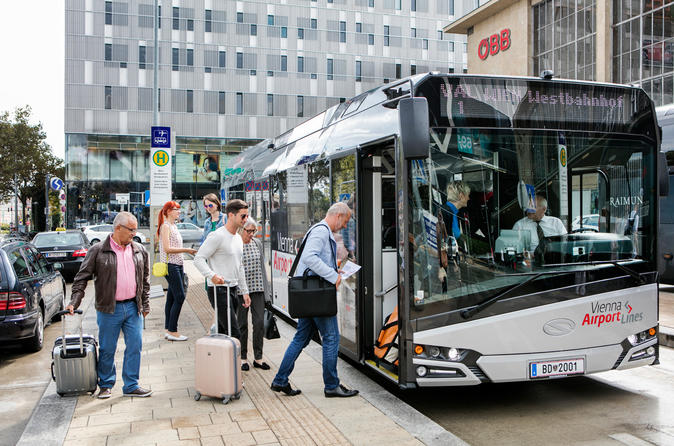 Don’t miss out on this offer! With this combination ticket, you can take the bus from the Vienna airport directly into the city and back and see Vienna’s best attractions with the HOP ON HOP OFF sightseeing bus.

With the airport buses you can easily get from the Vienna airport to the city. Choose from 3 different routes: to Westbahnhof via the main train station (Hauptbahnhof), to Morzinplatz / Schwedenplatz, or to the 22nd district (Donaustadt) via the Vienna International Centre. From Westbahnhof you can easily change to the YELLOW LINE of the HOP ON HOP OFF bus. At the station Morzinplatz / Schwedenplatz you have the possibility to go directly to the RED LINE of the HOP ON HOP OFF bus and from the 22nd district, you can reach attractions with the BLUE HOP ON HOP OFF line.

The HOP ON HOP OFF tours of VIENNA SIGHTSEEING are an easy way to explore Vienna. You can choose from 6 routes and over 50 stops. Hop on and hop off at as many stops as you like with just one ticket. Tickets also include a guided city walk through the historical city centre of Vienna .

The RED LINE takes you to the most important buildings along the Ringstraße boulevard, from the State Opera past the Imperial Palace, the Museum of Art History, Parliament and Vienna City Hall to Burgtheater. From there, the route continues on past the Augarten park to Schwedenbrücke and back to the Opera via Stadtpark and Kursalon.

This line takes you from the State Opera to Schönbrunn Palace. Other stops along the route are the famous Naschmarkt, known for its culinary delights and international atmosphere, Vienna Main Station, the Museum of Military History and Belvedere Palace.

The BLUE LINE takes you from the Museum of Applied Arts directly to Kunsthaus Wien and the Hundertwasser Museum. The route continues past the Prater amusement park with the Giant Ferris Wheel - one of Vienna’s most famous landmarks – the 150-metre Danube Tower and the Old Danube, a quiet sidearm of the mighty river.

The GREEN LINE takes you from the city centre to Grinzing on the outskirts of Vienna, famous for its vineyards and the many traditional wine taverns (Heurigen). From there, the route takes you up Kahlenberg, which affords a magnificent view of the city.

Explore Vienna’s city centre on our guided city walk. You will hear interesting facts about Austria’s capital and see some of the 1st district’s most famous buildings, such as St. Stephen’s Cathedral and the State Opera.

Don’t miss out on this offer! With this combination ticket, you can take the bus from the Vienna airport directly into the city and back and see Vienna’s best attractions with the HOP ON HOP OFF sightseeing bus.

Our system is experiencing some issues at this time. Please try again later.