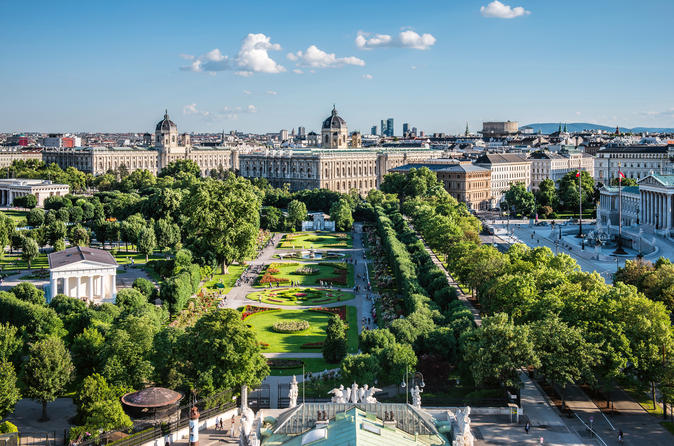 Discover most remarkable and picturesque sights in Vienna city and its romantic outskirts by this extended half-day tour in comfortable way.

If you are visiting Vienna for the first time, this is an excellent way to learn about the history and see the most important sights of the former imperial city. You will drive along the Ringstrasse, Vienna’s most famous boulevard, with its many magnificent buildings, including the world-famous Vienna State Opera, the Hofburg imperial palace, Parliament, the City Hall and the Burgtheater.
The next architectural highlight is the striking, colourfully decorated Hundertwasser House, before continuing past the Prater recreation area with the Giant Ferris Wheel and the church on Mexico Square to the River Danube, where you will see the UNO headquarters and other impressive modern buildings.
In contrast take a look at Belvedere Palace, a jewel of baroque architecture, the gardens of which have always offered a stunning view over Vienna.
The tour then continues to the town of Baden, a popular thermal spa resort, also renowned for its architecture, the largest casino in Europe and the famous musicians who lived and worked there, including Ludwig van Beethoven.
Drive through the picturesque “Helenental” to the former hunting lodge of Mayerling, today a memorial chapel, where Crown Prince Rudolf tragically committed suicide with his lover, Baroness Mary Vetsera. You will also visit the medieval abbey of Heiligenkreuz, one of the oldest and most significant monasteries in Austria. The next stop will then be at the “Seegrotte”, a mystic gypsum mine, where you will have the opportunity to take a boat ride on Europe’s largest underground lake (price approx. 11,- ).
Passing by impressive Liechtenstein Castle, reminiscent of the medieval history of this region, you will continue to Schönbrunn Palace. This splendid palace was the summer residence of Empress Maria Theresa and the Habsburg dynasty. Here you can either leave the group to explore the palace, the exceptional gardens and the oldest zoo in the world on your own, or return with the group back to the meeting point, driving past Otto Wagner’s beautiful Art Nouveau houses on the way.

Discover most remarkable and picturesque sights in Vienna city and its romantic outskirts by this extended half-day tour in comfortable way.